The biggest european photo festival will come to Baden 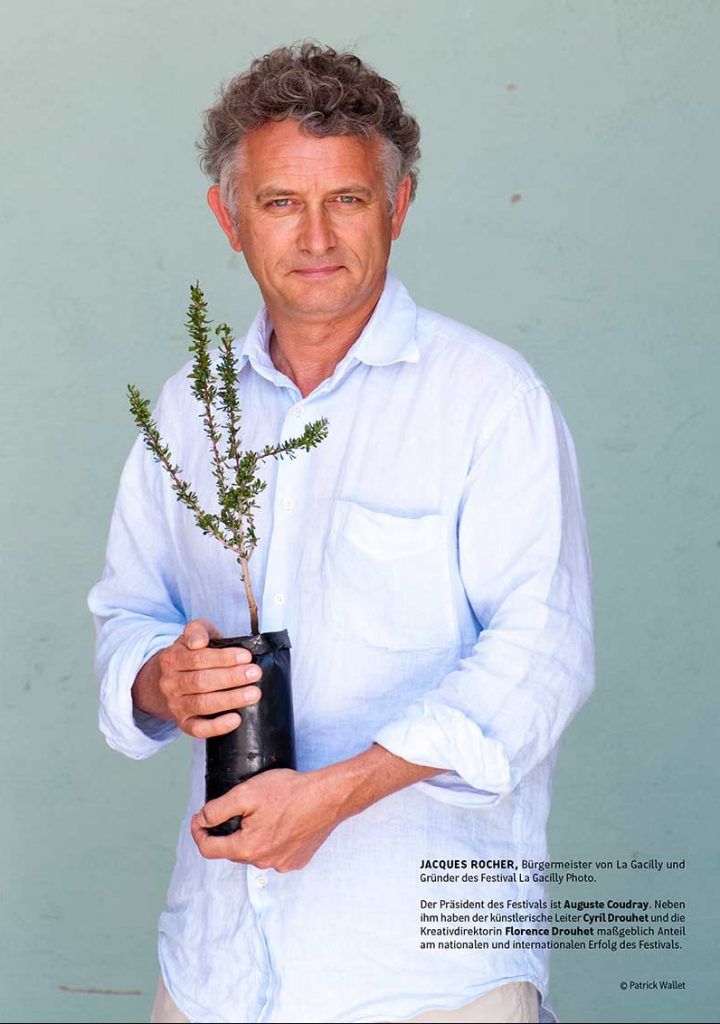 HOW IT ALL BEGAN…

JACQUES ROCHER, today President of the Fondation Yves Rocher, initiated a festival of photography in 2004 in his birthplace La Gacilly. It was dedicated to the theme of Man and the Environment. Convinced that it is our duty to engage with the future of our planet and to look for humanistic and sustainable concepts for our interaction with nature and with each other, he and his Leading Team turned the Festival La Gacilly Photo into an event that has set an international standard of social relevance in bringing together artistic photography and photojournalism.

A UNIQUE, INNOVATIVE CONCEPT Combining first class art with a strong rootedness in the region, the Festival La Gacilly Photo in Brittany, France, allows every visitor to immerse him- or herself fully in an open air festival and to embark on a quest through 35 open air galleries presenting 2 000 photographs on screens up to 70 m2 in size. The squares, lanes and gardens of La Gacilly are transformed into a sheer village of pictures. The place and its historic buildings serve as an ideal backdrop for the photographs. Public space turns into the scenery for the experience of photographic art, and entry to the exhibitions is free.

A FESTIVAL THAT USES ART TO PICK UP SOCIETY’S KEY THEMES Each year, the focus is on two main spheres: geography and the environment. On the one hand, modern photographic art will centre on a country or a continent, for instance, Sub-Saharan Africa in 2017, Japan in 2016 and Italy in 2015. On the other, the focus is on environmental issues, for instance, Relations between Humans and Animals In 2017, The Oceans of the World in 2016, Feeding the Planet in 2015.

AND THE FESTIVAL APPEALS TO EVERYONE. In tune with the time, it raises issues, denounces, surprises, calms and gives hope. And this is the message: For humans to live in harmony with themselves and nature, they must maintain a sustainable relationship with the planet. Against socially and ecologically destructive production techniques, the festival encourages harmonious coexistence and a peaceful, open, attitude vis-à-vis others, a mindful lifestyle and a sustainable, socially compatible, model of the economy.

THE FESTIVAL INVITES visitors to embark on an instructive, high-class, pure enjoyment with their friends and family. It brings the locals together and gives them a feeling of belonging through their involvement in an exceptional event.

AN ECONOMIC DRIVER in the run-up to and during the event, the festival makes culture serve rural life and demonstrates perfectly the attractiveness of an area formerly plagued by emigration. It builds a positive model of development and by involving public partners, such as the municipality of La Gacilly, an association of several municipalities from Oust to Brocéliande, the Departement of Morbihan, Brittany, DRAC, and private partners, such as the Fondation Yves Rocher, the Société Générale, Vrai, as well as the press and media, all of them committed to shared values.

FROM ITS BEGINNING, THE FESTIVAL LA GACILLY PHOTO HAS BEEN SUPPORTED BY AN ASSOCIATION that creates many jobs in the summer. An important cultural as well as socio-economic actor, the festival association takes on a revitalizing role for the entire region. At regional level, as well as at national and international level, the Festival La Gacilly Photo is seen as a cultural event that enhances the local structures and helps making Brittany known across the world.

WITH 400 000 VISITORS, THE FESTIVAL LA GACILLY PHOTO IS THE MOST SUCCESSFUL PHOTO FESTIVAL IN EUROPE.

FUTURE After collaboration on the book Baobab – The Magic Tree by French top photographer Pascal Maitre, Jacques Rocher invited publisher Lois Lammerhuber to the opening of the Festival La Gacilly Photo 2017. Lammerhuber was fascinated by the creative and narrative power of the exhibitions and began to wonder about inviting the festival to his native town of Baden. Exactly one year and one week later. With an identical structure and content. Organized symbiotically and in partnership. Jacques Rocher took up the idea with enthusiasm.

And as the concept at once convinced and fascinated the mayor of Baden, Stefan Szirucsek,

The biggest european photo festival will come to baden on 8 june 2018.