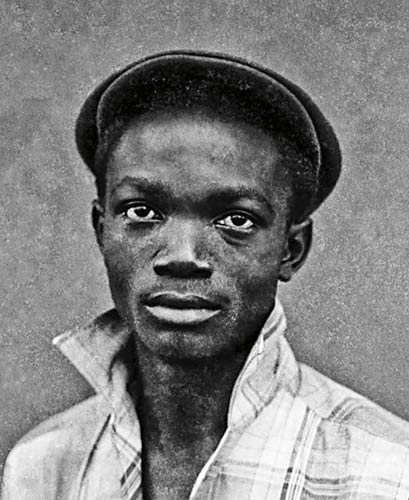 In Africa in the 1950s, cities were emerging, singing and dancing, from the servitude of colonialism to embark on the long, slow and difficult journey to joy and independence. Everyone was aware that they were living through a time when the modern world was finally within their grasp. Worrying about the colour of their skin was becoming a thing of the past. In Kinshasa, in the heart of the former Belgian Congo, the American way of life was booming. The capital became a stage on which expensive cars, women in light gowns swaying their hips, boys in cowboy outfits with shuffling feet, electric guitars, saxophones and music from all around the world crossed paths against a backdrop of Congolese culture. Groups of young Kinshasans formed like clans, each one with a leader and specific dress code. All the ingredients for a Kinshasan West Side Story were united.

Jean Depara introduces us to this quaintly outdated environment. Each picture by this photographer, who died in 1997, reveals a little more of the excitement of the world he was part of. Looking at these shots, we can imagine him in the midst of young women, besotted couples, musicians, and the barmen
and patrons of the Afro Mogenbo, Champs-Elysées, Djambo-Djambu, La Péruche Bleue and Show Boat clubs.

At the time, the city we now call Kinshasa was already a cosmopolitan place. It was home to Ghanaians, Senegalese, Congolese, Africans from every other country and Europeans looking for adventure and new experiences. Léopoldville (the future Kinshasa) and Brazzaville (on the opposite bank of the Congo River) were enjoying a time of unity before the divisions of the 1980s.

Throughout his life, Jean Depara returned constantly to this carefree time when his country, the still Belgian Congo, finally opened up to life. He found fulfilment through his photography, which is suffused with freedom. Only the pictures now remain. In black and white, to be sure – as Depara felt that colour produced “photos lacking in relief” – but nonetheless shimmering and steeped in nostalgia.
Based on a text by Pascal-Martin Saint-Léon and Jean-Loup Pivin / La Revue Noire