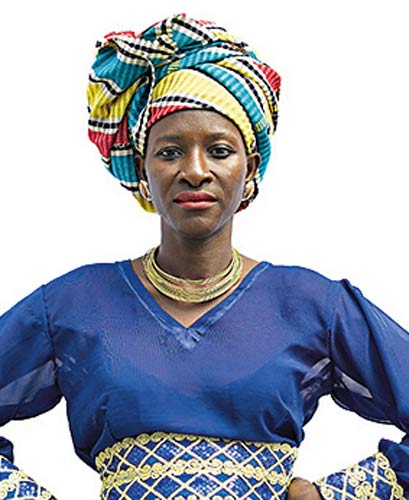 “Photography is my life”, declares Fatoumata Diabaté enthusiastically. Born in 1980 in Bamako, this young woman acknowledges her desire to perpetuate the legacy of her masters, from Seydou Keïta to Malick Sidibé, who photographed their contemporaries in their studios. While her work is inspired by this tradition, she brings her own personal touch to it. For several years, Diabaté has run her own street studio, using fabric from her native Mali as a distinctive backdrop, along with a few accessories she carries wherever she goes. Passers-by stop, strike a pose, and leave their mark.

Nothing in her upbringing foretold a career in photography. What she wanted was to simply get by. “I wanted to work to earn a living and look after my family.” But in 2002, while studying at a training centre for young women, her headmistress sent her on an internship at the Cadre de Promotion pour la Formation en Photographie de Bamako (CFP). In the end, she spent two years there. Commitment, motivation and dedication are the characteristics of a promising student according to the director of the CMP. At the end of her course there in 2004, Diabaté decided to stay on at the CMP to perfect her skills, particularly in black and white analogue photography techniques. She was eventually hired as an assistant in the development laboratory.

“I ultimately realised that any job approached with love brings satisfaction in the end”, remembers Fatoumata. And her perseverance paid off. In as early as 2005, her work was selected for exhibition at the 5th edition of the Rencontres Africaines de la Photographie in Bamako. She subsequently won several awards and took up residences in France and Benin. “I silenced all those who said I was mad to choose photography, an industry supposedly reserved for men. Today, I am respected for the quality of work I produce”, she emphasises, revealing that she would like to open her own cultural centre in Mali one day.

In addition to the series of portraits produced in her mobile studio, the photographer will spend several weekends in Baden taking African-style portraits of the festival visitors.