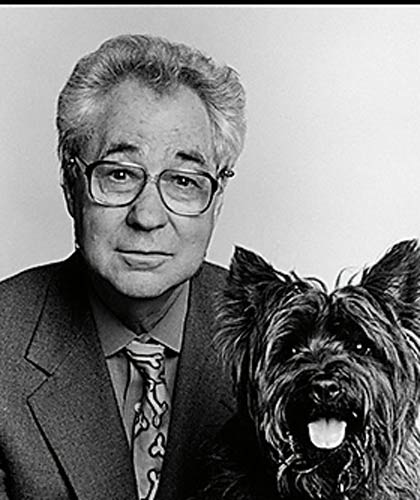 According to his website, Elliott Erwitt likes just two things: children and dogs. He has four children, and has devoted two entire books to dogs. Although the name of this member of the Magnum agency and leading light of 20th century photography is most likely to bring to mind his now famous portraits of Simone de Beauvoir, Marilyn Monroe, Robert Nixon and Nikita Khrushchev, you would be mistaken to expect that here. The fifteen or so of his photographs included in this exhibition span nearly half a century. From Hollywood in the 1940s to Brazil, Ireland, France and Japan, 50 years of canine life are illustrated with the same intensity, insight and genius that he employed in capturing images of some of the world’s most famous names.

There is no discrimination in his choice of subjects: from a perfectly groomed pooch to a mongrel wandering on a beach, and from a giant hound slouched against its master to a puppy pulling on its lead, Erwitt will capture any dog that fascinates him. In this original approach to depicting the human condition, the dog becomes a mirror and man is almost incidental. For this skilled photojournalist, who continues to consider himself an “amateur photographer” despite an exceptional career, these dogs possibly represent his ideal models. “Amateur comes from Latin and means one who loves”, says the photographer. “You can never be entirely in control of a photograph. A certain uncontrollable instinct comes into play.”

So what’s the secret behind this spontaneity? A small bicycle horn that he takes everywhere with him and uses to deliberate effect. “It’s almost embarrassing”, explained the photographer in an interview for The Guardian, “but I do have one trick for taking portraits. I carry one of these little bicycle horns in my pocket and once in a while, when someone is sour-faced or stiff, I blow my horn. It sort of shatters the barriers. It’s silly, but it works.”

If he raises a smile with his pictures tinged with humour and a keen sense of the ephemeral, the almost “Chaplinesque” spirit with which he immortalises these dogs’ lives is central to Erwitt’s oeuvre. According to his colleague and friend Henri Cartier-Bresson, Erwitt “achieved a miracle, working on a chain-gang of commercial campaigns and still offering a bouquet of photos with a flavour, a smile from his deeper self”. This is the prerogative of the world’s greatest photographers.