Brazzaville and the Kings of SAPE 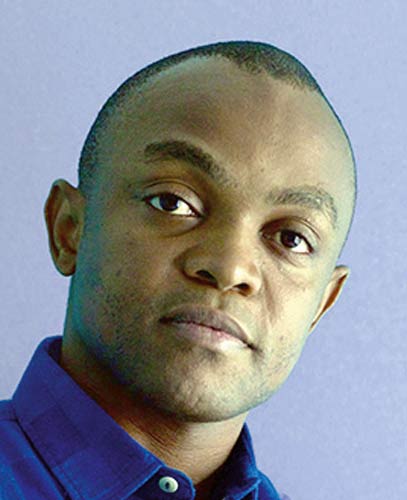 Brummell, Wilde and Baudelaire, the original dandies, would have told you that simplicity is the best way of standing out. It’s not certain that the Brazzaville sapeurs would agree with that premise! Yet seeing them kitted out in their finery, striking poses, pouting and competing in sartorial duels in which colourful jackets, fuchsia trousers and cravats serve as their foils, “dandy” is inevitably the first word that springs to mind. Baudouin Mouanda is a rising talent in African photography, who introduces us to this very idiosyncratic world through the pictures he garners strolling through Brazzaville. His carefully composed photographs show these men emerging like fashion models and transforming the Congolese capital into an improvised “runway”.

It all started for Mouanda in 1993 when his father, a physical sciences teacher, brought home a camera. This marked the beginning of Baudouin’s interest in light and perspective, and the effects that could be obtained by using different lenses. But the political events in his country, torn apart by civil war, interrupted his burgeoning passion. “In addition, my father didn’t believe photography was a decent profession”, recalls the photographer. In 2003, he benefited from a training scheme set up by the European Union, during which two of the photographers leading the course spotted his talent. “It was no coincidence that I started working on the sapeurs at the end of the 2000s”, continues the photographer. “After the war, everyone was traumatised. The sapeurs played a very important role because this damaged population had no entertainment, no cinemas. At the time, they were considered to be street performers: they weren’t fighting with weapons but with clothes.” Beyond the sapeurs, Baudouin Mouanda also captures the astonishing energy of the streets with his boldly framed photographs that have become genuine hymns to life itself.

SAPE – The Société des Ambianceurs et des Personnes Elégantes is a variation on traditional dandyism that combines social conventions with political awareness. It is a perfect echo to what Baudelaire said on the subject: “These men, who like to be called refined, beaux, lions or dandies, all stem from the same origin and all share the same characteristic of opposition or revolt; all are representatives of what is best in human pride, of that need, too rare in the modern generation, to fight and destroy banality. This is the source, with dandies, of that haughty, patrician attitude.”