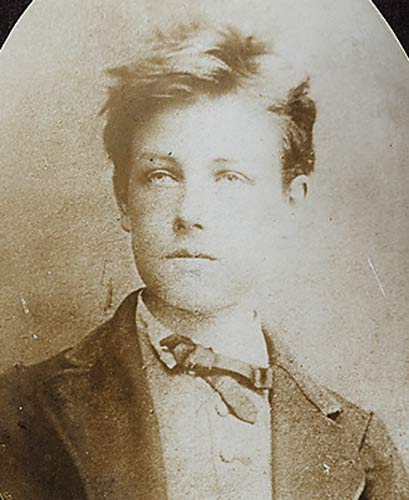 The treasures of the Arthur Rimbaud museum in Charleville-Mézières reveal a little-known side of the writer of the Illuminations. For in addition to being a talented poet, traveller and adventurer, Arthur Rimbaud was also a photographer.

Rimbaud and his classmates at the Collège de Charleville middle school spent 1866 dreaming of embarking on an expedition to the sources of the Nile. This fantasy trip was fleetingly referred to in A Season in Hell when Rimbaud describes the people of Cham. Ten years later, the poet embraced his adventurous streak and joined the Dutch Colonial Army. He had to wait another four years, however, before finally setting foot in Africa during a brief stop-off in Suakin followed by Massawa on his way to Aden in modern-day Yemen, where he eventually arrived on 17 August 1880.

At the time, he had abandoned his poetry but continued to write very regularly. His letters recount his recurring frustrations with his new life, “a life of unhappiness and dissatisfaction, fuelled by an unyielding desire to be elsewhere, punctuated by conflict with his employers, risky business plans, and stays in Harar at the end of gruelling camel expeditions”, writes Pierre Leroy. As soon as he arrived, he described the city nestled in the crater of a volcano as “a terrible rock devoid of a single blade of grass or drop of drinkable water”.

Aden wasn’t Africa, but it was close. Somali sambuks laden with hides, coffee, ivory, gold and dreams came floating in from this mysterious continent on the other side of the gulf. The corridors of the Hôtel de l’Univers were filled with tales of exploits and adventures brought back by travellers returning from this ancient terra incognita. Rimbaud heard the call of the unknown, and responded. He took to the seas, seeking to quench his thirst for exploit and action, on a mission to forget everything. To exorcise poetry and his rejection of the poetry that had formed the backbone of his life, he needed a new obsession. That obsession was to be Africa.

Rimbaud’s Africa is made up of sweeping landscapes imbued with the unknown, timeless solitude, deserts of shattered rock, camps, nighttime, painfully slow marches, the caravans, the mountains and their rivers. Rimbaud’s Africa is also the round huts lost in the middle of nowhere, and the rare few towns and cities, particularly Harar, rising up like a labyrinth teeming with life.

The collection of old photographs held by the Arthur Rimbaud Museum in Charleville-Mézières and the Voyelles media library attempts to provide images that sit alongside the words used by Rimbaud in his letters: words such as those found in the text above, in which ambivalence is palpable, with Rimbaud continuously torn between the harshness of his new life and a fascination for his surroundings. The collection evidently includes the few photographs taken by Rimbaud himself in 1883, when he tried his hand at photography, including the three self-portraits he sent back to his family. It also includes all the photographs produced by the peers and contem- poraries he often met in the minuscule European community found on the shores of the Red Sea and Abyssinia in the late 19th century.