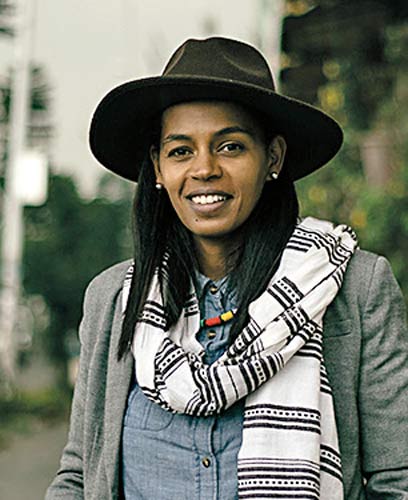 Aida Muluneh spent her youth travelling, from England to Yemen, North America and Cyprus. But her country of birth, Ethiopia, has always held a special place in her heart. After studying at Howard University in Washington, Aida began her career alongside other Afro-American photographers and worked as a freelancer with the renowned Washington Post before choosing a more artistic path. She says she is “obsessed” with Africa, and particularly with how it is portrayed. This is notably the case for her homeland Ethiopia, which seems to be inextricably associated with the 1980s famine.

When she returned there for the first time in 2007, 28 years had passed. “It’s a country caught between past, present and future”, she says. The food crises are still there. A brand new tramway – the first in sub-Saharan Africa – too! “You can find every aspect of the human condition in Ethiopia, she continues. Total misery as well as ecstatic joy: you can see everything within the space of a day. But Africa is treated unfairly: when you see black people in the United States, they’re always linked with drug-dealing or murders. It’s the same with Africa: all we see is starving people and war.”
Why The World is 9? Although the series in question dates from 2016 (9 years after her return to Ethiopia), the title is attributed to an expression her grandmother used to say: “The world is 9; it is never complete and it’s never perfect.” The entire oeuvre, which comprises 28 pictures, explores questions that the artist raises about love, life and history with a sense of poetry, inimitable style and careful use of colour. “But I’m not looking for answers. I just want to make people reflect on the lives we lead as individuals, as a people, as a nation.”

A former journalist who has become an internationally renowned artist, Aida Muluneh is also a philanthropist: in 2010 she founded the Addis Foto Fest, whose primary aim is to bring black American and African photographers together, while encouraging Ethiopians to take ownership of their country’s story. Last year, the work of around thirty artists was exhibited. “International visibility is growing. I can see talent developing. We’re making progress on the entire continent, not just in Ethiopia. One step closer to the age of reason.”