FOCUS IN JULY: 50 YEARS SINCE THE MOON LANDING

“That’s one small step for a man, one giant leap for mankind.”

Neil Armstrong’s words mark the biggest adventure of mankind to date. On 20 July 1969, at 03:56 hrs CET, Neil Armstrong and Buzz Aldrin were the first terrestrials to step on the Moon as part of the NASA Apollo 11 mission. To this day it is the only celestial body on which a human has stood.

Brian May discovered his passion for stereo photography even before his love for the guitar made him lead guitarist of Queen and world-famous. Later he founded The London Stereoscopic Company, curated by Denis Pellerin. In memory of the first Moon landing, Dr May – he also studied astrophysics – and Pellerin transformed the ‘flat’ pictures of the Moon landing into 3D photographs. In this way they give us the Moon landing, 50 years later, in a stereoscopic view. Hermine Raab, President of the 3D Club Austria, supports their project. 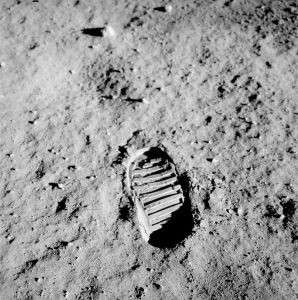