Sasan Moayyedi wins the „Peace Image of the Year 2020“ 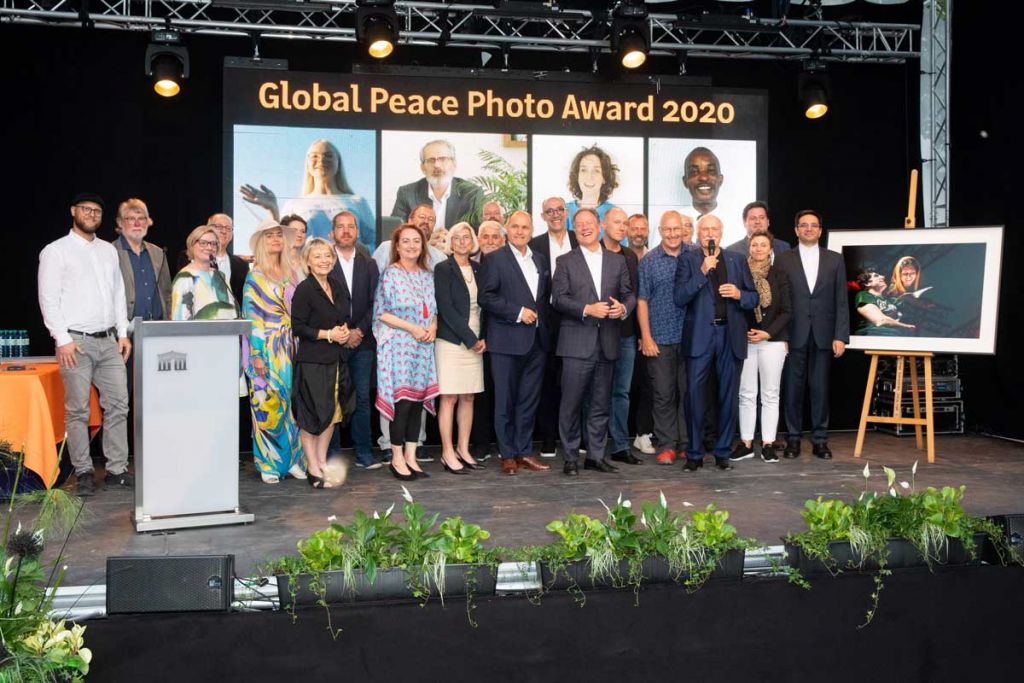 The iranian photographer wins with a photo from his reportage „Love Story“ about the remarkable fate of Salah Saeedpour.

All winning images are exhibited during the Festival La Gacilly-Baden Photo in the Kurpark.

Baden near Vienna, 19 July 2021 – After a delay of almost a year due to Covid 19, the winners of the international Global Peace Photo Award competition were honoured for the eighth time this evening: Alain Schroeder for „Saving Orangutans“, Catalina Martin-Chico for „(Re) Birth“, Emeke Obanor for „Heroes“, Nicolas Asfouri for „Hongkong Unrest“, Sasan Moayyedi for „Love Story“. The Alfred Fried Peace Medal was handed over to the five prize winners. The main prize Peace Image of the Year 2020, inspired by the 1911 Austrian Nobel Peace Prize winner Alfred Hermann Fried and endowed with 10,000 euros, went to the Tehran-based Iranian photographer Sasan Moayyedi for his reportage on the remarkable fate of Salah Saeedpour. One day in September 2001, at a family picnic in the Iranian-Kurdish province of Marivan near the border with Iraq, Salah Saeedpour, then 15 years old, steps on a landmine, one of many leftovers, dangerous until today, from the Iraq-Iran war of 1980-1988. The boy loses both hands and both eyes. He becomes a physical cripple; in the figures that measure such things, he is now 70% handicapped. But he does not give up. He trains his mutilated body, even without being able to see the world, until he wins medals for swimming. And he meets the love of his life, a young Kurdish woman, whom he marries in 2014: Sarveh Amini.

The international jury described Moayyedi’s reportage „Love Story“ as „the story of a private peace that has the power to triumph over war“.

14-year-old Anastasiya Bolshakova won the best peace picture in the children’s and youth category, which was awarded with 1000 euros, supported by the Vienna Insurance Group.Her photograph „Flight of the Soul“declares her love of summer. A time when, she is convinced, „everything lives“ and „nature breathes deeply“. A time when everything „is ready for beauty“. When flowers smell wonderfully. A time of idleness and bliss. In this time, especially, she wants to capture thoughts. Anastasiya photographed such moments of roaming thoughts with a self-timer. Free of any strain. Clearly in a time before, or at least far from, covid. In a peaceful childhood in a peaceful landscape. A little bit dreamy, very light, very airy. Carried by the feeling of being able to fly safely between heaven and earth.

The prize was presented by Prof. Elisabeth Stadler, CEO of Vienna Insurance Group (VIG): „For Vienna Insurance Group, assuming social and cultural responsibility is a particularly important concern. We support intercultural diversity and connections, with a special focus here on children and young people.“

In his welcoming speech, Wolfgang Sobotka, President of the Austrian National Council, said he considered himself fortunate that the Global Peace Photo Award was presented in the rooms of the Austrian Parliament – which this time, however, were transformed into a stage in the „Kurpark“ of Baden near Vienna as an alternative venue for the two hours of the award ceremony, integrated into the framework of the La Gacilly-Baden Photo Festival, where the award-winning pictures are exhibited and can thus be seen by around 300,000 visitors until 17 October.

Sobotka continued: „Photography, as a very special art medium, has the mission to lead us forward and to awaken our sensibilities. What these images give us tonight is what we call contemplation. This is what our republic needs, this is what the world as a whole needs, and this is what every single person needs. Because everyone struggles to live in peace for themselves, for their family, for their surroundings, and to make the most of it. Photography knows how to capture these moments and present them to us instantaneously. And for that I am also personally grateful.“

Lois Lammerhuber, who initiated the Global Peace Photo Award together with his wife Silvia Lammerhuber,reminded the audience that „peace is not the absence of war, but something I would like to call a successful life“.

Invited by Barbara Trionfi, Director of the International Press Institute (IPI), Márton Gergely, Editor-in-Chief of the Hungarian weekly HVG, said in a moving speech: „We are working in a time when the powerful decry disagreeable media as fake news and declare journalists the enemy. They accuse media professionals of being political actors who spread lies in the service of ideology. They do this because they know: Real journalists can only respond to their provocation in a very limited way. Journalists are committed to the truth. Unfortunately, the powerful of this world are not.“

The last award ceremony took place in September 2019. Since then, 91 journalists and photojournalists have been killed around the world. Danish Siddiqui was head of photography for Reuters in India. He died four days ago in a Taliban ambush in Afghanistan. A day earlier, we lost Peter de Vries. He was gunned down – in the middle of Amsterdam the killers fired at him. Only days before, Alexander Lashkarava died of his injuries. He was beaten up by right-wing thugs when he wanted to report from an anti-LGBTQ march.

This year’s chairman of the 25-member jury Pascal Maitre from France, who could not attend, was represented by Lars Boering, director of the European Journalism Center in Maastricht. „It’s easy to capture an image but to tell a story through an image is much more difficult and especially is telling a story through a series of photos. What we are trying to find as a jury is about something, about peace, and this is very often a difficult task. We will continue to make an effort to make it grow, and we will continue our work as jury members. I am happy to do so. I think it is a fine initiative, it is worth it and I hope that you will enjoy the great photography that we will see. Because I can certainly say that the photos that we awarded are about something.“

The statement of the jury members from eight nations for the total of six awards was formulated by the long-standing GEO editor-in-chief Peter-Matthias Gaede from Hamburg.

David Beasley, the Executive Director of the UN World Food Programme, which was awarded the 2020 Nobel Peace Prize, gave a blazing speech. He said he was convinced that it was possible to end world hunger, but that only peace could pave the way: „Hunger is increasing around the globe, and the main cause remains conflict. Conflicts create hunger, and hunger in turn fuels conflicts. It is a vicious circle that is reinforced by climate change and the pandemic, and we must break it! The winning pictures are a reminder that love and compassion can heal the wounds of war and give hope. I have hope for a better future, and that drives me and my dedicated WFP colleagues working on the frontlines of the fight against hunger. Humanity is healthier, richer and more educated than ever before. Over the last 200 years, sustainable economic growth and development have lifted billions of people out of poverty. If we all stand together, from individual donors to governments to billionaires flying into space, we can end hunger in this world. Thank God for photographers who are allowing us to break through the fog. So the people can see the reality, because when people see the truth, the hearts are stirred and people respond.”

19,711 images from 118 countries were submitted to the Global Peace Photo Award 2020. Most of the entries came from Russia, China, India, Germany and Iran. The entries were judged by a prestigious international jury consisting of photographers, journalists and representatives of photo associations, the World Press Photo Awards, the German Youth Photo Award and UNESCO.

In addition to awarding the „Peace Picture of the Year“ to Sasan Moayyedi, the following were awarded Alfred Fried Peace Medals 2020:

Belgian Photographer Alain Schroeder for his reportage „Saving Orangutans“ about the teams of the Orangutan Information Center, Human Orangutan Conflict Response Unit and Sumatran Orangutan Conservation Programme. Their mission: to make peace with nature. Peace with those creatures of the forest who share 97 percent of their genetic material with us humans. In his very touching images Alain Schroeder shows what it means to save what can still be saved. He pictures dramatic emergency actions on injured and sick animals, operations, infusions, care, mercy with the tortured creatures. He shows the gratitude and intimacy that great apes are capable of.

French-Spanish Photographer Catalina Martin-Chico for her empathetic images „(Re) Birth“ about New life after 260 000 deaths. The freedom to love after all the prohibitions. Caring instead of fighting. When, after half a century, an agreement was drawn up in Colombia between the Marxist FARC guerrilla and the government to end the killing in the forests, something like normality began from 2017 in the hideouts of the former fighters and in the 26 transformation settlements. Its special characteristic is a small baby boom.

Nigerian Photographer Emeke Obanor for his work „Heroes“ about girls, kidnapped by the Nigerian terror troupe Boko Haram. They had been brainwashed. Should abandon any desire for schooling for girls. They were freed in an action of the Nigerian military. Or were able to flee when they were sent out with bomb belts on suicide missions. Now they are free at least. And back at school. Back in a place where they are allowed to learn and get smarter. Where they are allowed to read, write and operate with figures.They are back from the war and in peace. Traumatized certainly. Maybe even stigmatized. But some of them have retained the strength to hold on to their dreams. They are 16 or 17 years old. They want to become nurses or teachers.

To the Beirut-born Danish photographer Nicolas Asfouri for his work „Hongkong Unrest“: It is the year 2019 in Hong Kong. According to the agreement made between China and the UK in 1997, the former British Crown Colony is already a part of China, but until 2047 it should retain a largely autonomous status: „One country, two systems“. But the ever increasing attempts at a takeover by mainland China in this year 2019 manifest themselves, for instance, in a draft law by Hong Kong’s Chief Executive to facilitate the extradition to the Beijing regime of opponents to the system. Pupils and students take to the streets against that, young men and women. Then more and more people, a pro-democracy movement, mostly peaceful, in parts militant, ever more brutally suppressed by the police, at first with batons and tear gas, later with live ammunition.

The Award is inspired by Austrian pacifist and author Alfred Hermann Fried (* 11 November 1864, Vienna; † 4 May 1921, Vienna). As founder of the journal Die Waffen nieder! (Lay down your arms!) and other peace activities, Fried received the Nobel Peace Prize in 1911, together with Tobias Michael Carel Asser (* 28 April 1838, Amsterdam; † 29 July 1913, The Hague), organizer of the first International The Hague Peace Conference and instigator of the Permanent Court of Arbitration.