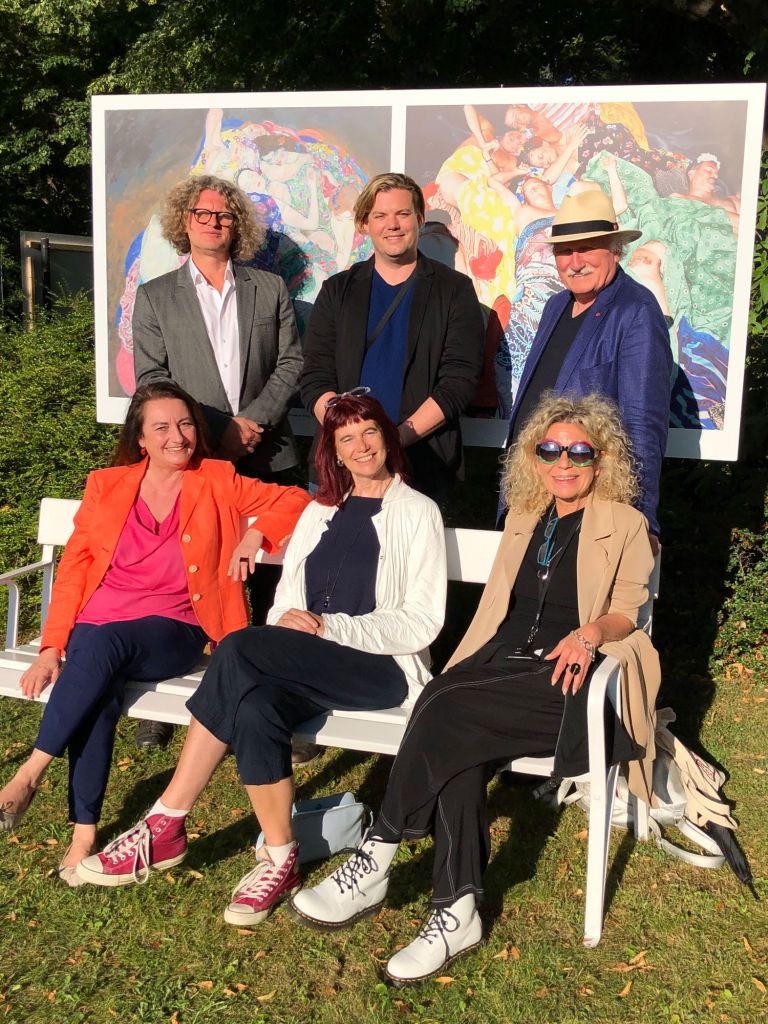 The special exhibition ORF kulturMontag #dubistkunst was opened on Friday, 17 July 2020 with a shoot for „ZIB1“ and „kulturMontag“ on 20 July 2020. On a bright and beautiful afternoon part of the editorial team of kulturMontag – ClaudiaTeissig, Ines Mitterer and Alexander Bogner led by kulturMontag boss Martin Traxl – met many of the exhibiting artists – Stefan Timofeev, Andreas Kandler, Achim Ferrandina, Florian Seidl, Dorian Schiffer, Jakob Vegh, Jessica Pikal, Gunda Cuba and Elias Campidell – as well as the team around the festival management of Silvia and Lois Lammerhuber – Johanna Reithmaier, Birgit Hofbauer and Martin Ackerl. We were especially pleased that the  Mayor of Baden Stefan Szirucsek had found the time to join us. He was accompanied by tourism director Klaus Lorenz.

Anyone can be an artist, Joseph Beuys once said, quoting the poet Novalis. And anyone can be an artwork – as evidenced by this exhibition which goes back to an initiative of the kulturMontag arts programme of Austrian state broadcaster ORF: When the global lockdown bans the enjoyment of art, it is not only artists who rise to higher creative spheres, turning the crisis into an opportunity. The cultural audiences around the world also proved inventive and started a global trend in recreating famous paintings. Museums presented a wealth of art online while they were temporarily closed because of infection concerns. They offered virtual walk-throughs and glimpses of their collections. Some, like the Frick Collection of New York or the Belvedere in Vienna, provided expert analyses of pictures. A public starved of art found inspiration here for creating imaginative designs. Be it Gustav Klimt’s world-famous Kiss or Peter Paul Rubens’ dramatic Medusa: recreations of paintings, sculptures or performances of art classics created a stir in Moscow, New York and Vienna alike. Art historians know this practice as “tableaux vivants”, that is, “living paintings”. Recreating famous pictures with real people was a party hit even back in the Renaissance and Baroque periods. Contemporary photographers – see David LaChapelle or Cindy Sherman – still enjoy this method.

Under the tag #dubistkunst (you are art), the TV arts programme kulturMontag teamed up with Albertina, Belvedere, Kunsthistorisches Museum, Lentos and MUMOK, calling on all Austria to join in with their creations, the ideas for pictures being collected on the account #dubistkunst. A high-profile jury, made up of Sabine Haag, Director General of Kunsthistorisches Museum Wien; Stella Rollig, Director General of Belvedere; Hemma Schmutz, Artistic Director of Lentos; Karola Kraus, Director of MUMOK, and Klaus Albrecht Schröder, Director General of the Albertina, assessed the entries. On 22 June 2020, the best, most surprising, or most inventive creations were presented on kulturMontag and awarded small prizes.

What you see here is a selection of the best works from 350 entries to the competition #dubistkunst.

The Festival extends warm thanks to the team of kulturMontag, led by Martin Traxl and Clarissa Stadler, plus Ines Mitterer, Claudia Teissig and Alexander Bogner, as well as to these museums: Albertina, Belvedere, Kunsthistorisches Museum Wien, Lentos, MUMOK, National Gallery Prague and Stiftung Preußischer Kulturbesitz Berlin, without whose generous support neither the competition nor the exhibition could have lived up to their motto: #dubistkunst (you are art)