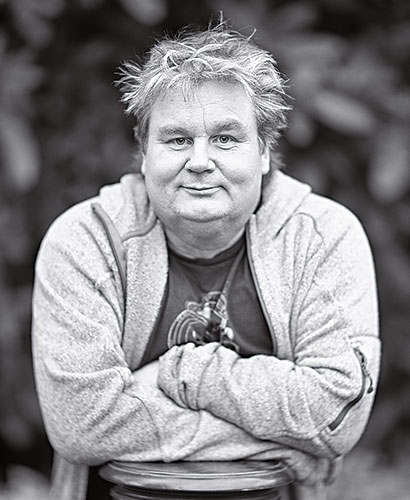 A good photograph is one that communicates a fact, touches the heart, leaves the viewer a changed person for having seen it. It is, in a word, effective. Jan C. Schlegel likes to quote Irving Penn when explaining his work. The last time we had the pleasure of hosting him at La Gacilly was in 2013. And the clear blue eyes of the young Monteria, a Kalash child he met in the peaks of Pakistan’s Hindu Kush, linger on in the festival’s collective memory.

Jan C. Schlegel was born in Germany in 1965 and became fascinated by photography in his teenage years. He soon developed a passion for black and white photography, and learnt to add his stamp to it in a very unique manner. Despite the travels that have taken him through 61 countries to meet the planet’s last surviving tribes, the photographer is back at our festival to showcase insects, rather than human life.

Snapped like his previous series – against a plain backdrop –, this Of -Monsters & Dragons series proves Jan C. Schlegel still plans to keep us on our toes, experimenting with calotype salt print, a 19th century process invented by scientist and photography pioneer William Henry Fox Talbot. I experimented with this process for four months, he tells us. It’s a very old technique. And I think I must have made every mistake it’s possible to make. I think I have a very good understanding of the process as a result! It took a lot of time, paper and silver nitrate, but I really feel these first prints are the first that are truly a success. And that this archaic technique is the one that best suits the fragility of my subjects.

And with good cause: his subjects are insects. A total of 16 butterflies, beetles and cockroaches that Jan Schlegel wanted to capture close-up, and for a unique reason. When you see these little creatures wiggling and squirming their way around us, you shriek, run, or squash them, as if you were taking on a dragon. And yet these insects coexist with us, living side-by-side with us in great numbers. We so very rarely take the time to truly observe them, to sit down and gaze into the eyes of these Monsters and Dragons. In this series, I wanted to emphasise their beautiful details to showcase them in their true light, and in all their glorious beauty.

As an addition to Of Monster and Dragon, Jan C. Schlegel will be able to show his latest piece of work Creatures of the Seven Seas at the Festival in Baden.