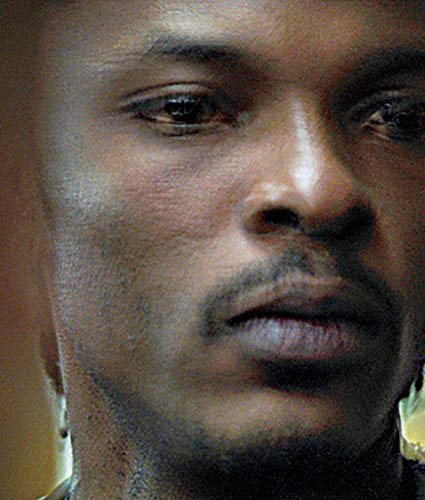 Before becoming a photographer, Sammy Baloji was a cartoonist and graphic novelist. His professional experience and artistic flair permeates his photographic approach. The work of this Congolese artist, born in the mining province of Katanga, is deeply rooted in the history of his country: he denounces the abusive and continuous exploitation of its natural resources. His photomontages subtly combine early 20th century ethnographic portraits taken from Belgian archives with old or recent landscapes that he paints or photographs himself.

As part of his assignment to photograph Lubumbashi’s colonial architecture and industrial sites, Sammy Baloji gained access to the photographic archives of the Gécamines mining company, which was the economic lifeblood of the Katanga province for several decades. The two resulting series, Remembrance and Kolwezi, contrast eras and symbols, reducing space and time and neutralising the self-serving discourse of those who sought to bring about a planned extinction of identity. In so doing, Baloji appropriates industrial colonial heritage and exhumes traumatic experiences in order to perform an autopsy of history. Then, by tackling contemporary history, he assesses the much-hoped-for renewal of Katanga province since the decline of Gécamines. Kolwezi offers a portrait of the resilience of this post-colonial society. The contrast between two worlds provided by these diptychs is not to be interpreted as a clash of civilisations, but rather as a revelation about the limitations of discourse on multiculturalism which, for some, is only acceptable when you take a great deal and give back very little. Yet Sammy Baloji is neither an activist nor a militant. He is an artist in the truest sense of the term, taking up a brutally honest position without resentment. His images are replete with silence, absence, desolation, and occasionally humour. Both gripping and disturbing, Sammy Baloji’s work makes a lasting impression. In his pieces, past and present intermingle and upset the hourglass.

Based on a text by N’Goné Fall