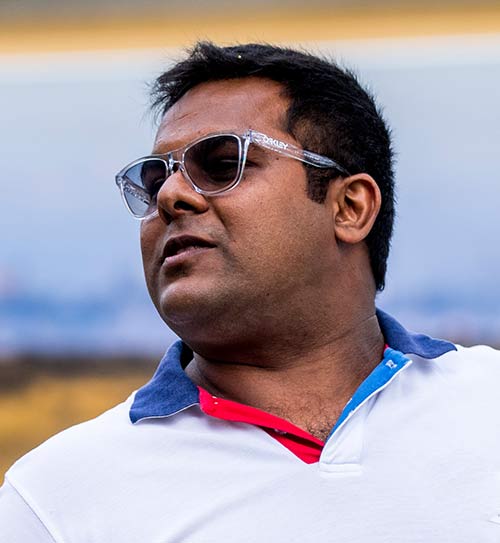 In April 2016, a 13-year-old lion named Mohawk – so called for the darkness of his mane – was shot by Kenya Wildlife Service rangers. The animal had escaped from its nature reserve and ended up in the town of Isinya, located about 50 kilometres south of Nairobi in Kenya. Soon encircled by a crowd, the lion panicked and leaped onto a man before escaping. Mohawk was killed by nine bullets – eight of which were shot while he was lying on the ground with an injured leg. The rangers used no tranquilliser darts.

Paras Chandaria witnesses this proximity between wild animals and the urban environment of Nairobi and its suburbs on a daily basis. His photographs show us giraffes, lions and ostriches living their final moments of freedom in the Kenyan capital’s national park. A few kilometres away from these last natural green spaces, business and residential districts are spreading outwards. This ever-increasing urbanisation threatens the reserve and disturbs the lives of the wild animals there, even provoking incidents such as the Mohawk episode. “I’m sad and heartbroken”, declared Paras Chandaria to his country’s press at the time. “And I’m angry. How can the people who are supposed to be defending our wildlife just slaughter a lion in front of so many people, including children?”

A member of an NGO fighting to safeguard Nairobi National Park, Paras Chandaria continues to photograph animals in order to shine a spotlight on this unique place where more than 80 species of mammals coexist. It is a complex battle in a country where the fight to preserve wildlife and stop poaching is rather ambiguous. In 2016, for instance, the Kenyan authorities undertook a large-scale communications operation in which 172 million dollars worth of confiscated ivory was burnt, while simultaneously drawing up a project for a railway line that will devastate the national park in the long term.

Paras Chandaria’s pictures highlight this astonishing juxtaposition of natural and modern environments. His pictures are unlike any others: they show lions and giraffes, which we like to imagine roaming free in the savannah, seemingly surrounded by new concrete jungles that – if they continue to grow at current rates – will soon overwhelm them.