The Studio in the Bush 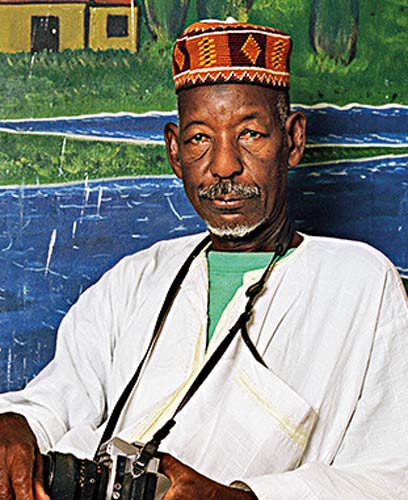 After Senegal gained its independence, the photographer Oumar Ly travelled extensively through the villages around the town of Podor, in the north of the country, as part of a campaign to compile personal identity documents. His arrival was announced by a tam-tam. A unfolded boubou garment, the white door of the sub-prefect’s 2 CV car or even the pale sky provided neutral backdrops. For this artisan photographer, taking photographs signalled, above all, a succession of technical problems he had to resolve, a setting, lighting that was barely sufficient, and being economical with film. From these shots taken for the authorities, only the severely cropped pictures of the faces were kept as photos for identity cards. Later on, the photographer returned to the villages alone during the holiday period or at the end of harvest, invited to shoot portraits of the elders, children and women.

In the bush – far from the studio he opened in Podor in 1963, where he used painted backdrops and accessories to stage photos – people posed without fuss, unaware of the conventions. The villagers and the photographer were totally free. Oumar Ly strived to introduce some sort of order into the disorder of the natural backdrops (courtyards or verandas), not so that he could include the vastness of the landscape but to capture every person’s uniqueness. He therefore introduced some limits. A mat, an outstretched pagne tunic or a rug isolated the elements that seemed unmanageable within the frame: anything beyond this was insignificant and superfluous. The elements that composed the image were then able to stand out and be reconstructed for another purpose: the portrait.
In these arranged situations, the subject is the sitter who must be seen and recognised. As a result, everyone contributes something of themselves, either timidly and clumsily or, on the contrary, by asserting their presence in the world or social status within the community.

These negatives have at long last been brought to light after decades spent buried in boxes. There is something extremely moving about them, compounded by the revelation of what lies beyond the subject – which was not intended to be feature in the final cropped square print.
These snatched glimpses allow us to guess at the landscape beyond: a rough stretch of arid earth scattered with acacia trees, swept by the warm winds from nearby Mauritania on the northern bank of the Senegal River.

Oumar Ly died in March 2016 at the age of 73, leaving us with this unique photographic legacy.
Frédérique Chapuis

We would like to thank Oumar Ly’s family, the Marie-Louise & Fils association, Filigranes publishing house and the French Embassy in Senegal for their help in gaining recognition for Oumar Ly’s work.