Nigeria: In the Belly of a Giant 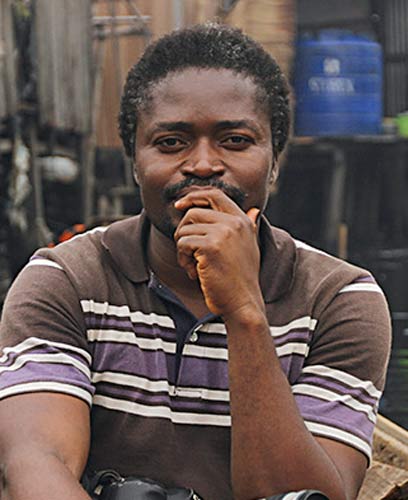 One day in December 2006, Akintunde Akinleye was walking through some still-smoking ruins. Thirty minutes earlier, the Nigerian photographer had been at home in Lagos when he received a telephone call from a friend telling him an explosion had just occurred in Abule Egba, one of the city’s suburbs. Once he arrived on the scene, he discovered that the incident had been caused by an attempted theft from a pipeline. The explosion claimed 269 lives. A stringer for British press agency Reuters at the time, Akintunde began to photograph the catastrophe. Then came the moment he spotted a man standing in the midst of the apocalyptic scene, holding a blue plastic bucket. He sent his files off and an hour later, his telephone rang. Finbarr O’Reilly, Reuters’ chief photographer for West and Central Africa, was on the other end of the line. “The picture of the man washing his face is excellent, congratulations!” The photo was published in the New York Times, the Washington Post and other newspapers around the globe. A few months later it won first prize at the World Press Photo Awards in Amsterdam. “I knew I had taken an excellent photo”, the photojournalist said at the time.

“But I never thought it would have such an impact. I really didn’t do anything complicated: I just waited for the framing to be right and took six photos of that specific moment.”

For a photojournalist, the true reward often resides in having work published rather than being awarded a grant or a prize. But the latter do have the merit of turning the spotlight, for a brief moment, on the issues raised by the photo in question. After winning the prize, Akintunde Akinleye was invited to judge other competitions and speak at conferences about the role photojournalism can play.

During these events, he was able to highlight the seriousness of the problems faced by his homeland, Nigeria. With his pictures, he introduces us to some of the many facets of this titan of the African economy and most populated country in sub-Saharan Africa: the illegal refineries that disfigure the Niger Delta region, the children working in gold-dust mines buried in mud, or the computer hardware landfills plaguing the teeming peripheries of the major cities, with their exploding populations.