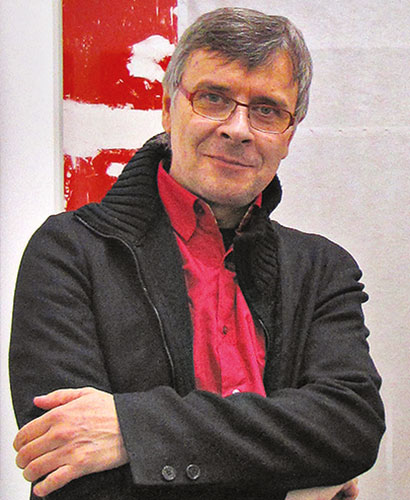 Stéphane Couturier’s subjects of choice are the planet’s major cities: -Brasilia, Havana, Barcelona, Berlin, Seoul, Paris, Moscow, as well as smaller towns such as Valenciennes, where he focussed on a car parts factory, or in Chandigarh in India.

This art photographer turned his attention to Algier’s Climat de France housing estate. This monumental, 38-metre-wide and 233-metre-long structure was designed by architect Fernand Pouillon in a peace-making attempt in a country devastated by the Algerian War. Commissioned by the mayor at the time, Jacques Chevallier, and designed for soldiers and Algerians fleeing the war, it is still home to a community of people who have lived here since it was inaugurated. Fate at work, or mere coincidence: Stéphane Couturier and the Climat de France were born the same year, in 1957.

Over time, this eerie phalanstery has been transformed into an overcrowded ghetto. Built from cut stone and originally designed to house 30,000 people, the 5,000 apartments crammed into this unsettling structure are now home to 60,000. Multiple families live on top of one another, packed into minute, cluttered flats. Overlooking the Bab El Oued district on the far western shore of the Bay of Algiers, Climat de France is the city’s biggest housing estate. Using your smartphone, open Google Maps and have a look. Viewed from above, it emerges as a perfect rectangle amidst the capital’s chaotic urban sprawl. Inside, an inner courtyard supported by 200 pillars operates like a miniature, autonomous clandestine city in itself, a place where the police fear to tread and business owners avoid tax.

In this exhibition, the La Gacilly festival has chosen to showcase the outside façades of the housing estate in a single, massive image. Made from dozens of photographs taken by Stéphane Couturier over several years, this image faithfully replicates the building in its entirety, albeit on a smaller scale, displayed like one endless tracking shot. A remarkable technical achievement from a talented photographer that truly embodies the gigantic scale of Climat de France. Couturier’s lens picks out two distinct architectures: the original design by Fernand Pouillon, and the second makeshift architecture erected by the building’s inhabitants over the years. Windows cut into the stone, others blocked off: damaged elements that, in the photographer’s eyes, become the unique details that bring a remarkable photograph to life.