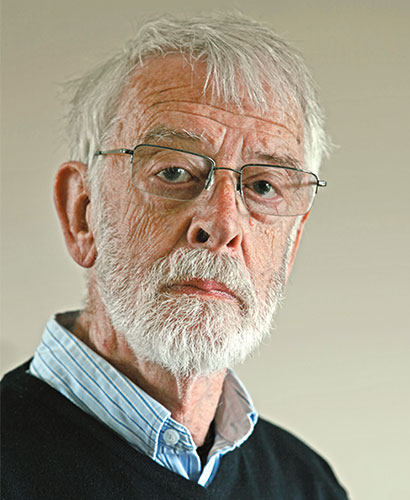 What happens when the infinitely small meets the infinitely big? Welcome to photography-assisted science. Retired teacher and photography enthusiast Spike Walker takes photographs that serve as colourful living proof of the world we inhabit. A Royal Photographic Society award-winner in 2010 and again in 2016 for his incredible contribution to photography and its application in medicine, like many other photographers, Spike Walker works in his studio. But don’t expect to find the usual flashes, reflectors, white screen backdrops and fans when you push open the door here. Because Spike Walker isn’t interested in models or actors, but in colonial algae, paracetamol crystals, rhinoceros horns and Diatoms. The tool of his trade is no traditional camera, but instead a device he attaches to microscopes, some dating back to the middle of the 20th century.

I was given my first microscope when I was 12, explains Spike Walker, and I quickly felt the need to try and render accessible the complex science that so fascinated me. It’s easy enough to strike up a conversation with a perfect stranger about last weekend’s football. Not so easy when you want to discuss microscopic organisms! I thought that at least this way, I’d be able to show them what that world looks like with photos. And to reveal, with brio, the life that teems invisible to the naked eye. While the word Bacillariophyceae (microscopic unicellular algae) may not mean anything to the average layperson, Spike Walker’s camera and meticulous microphotography techniques reveal an entire secret spectacle. By taking several images of the different layers of specimens he observes, the photographer manages to unveil all the dazzling beauty and complexity of these living organisms thanks to a polarising filter and oblique lighting. Hypnotic images that play with perspective and shapes already familiar to the viewer, surprising and unsettling the eye. Showcased in large scale, the photographs are oddly reminiscent of satellite images taken of our planet by astronaut Thomas Pesquet.