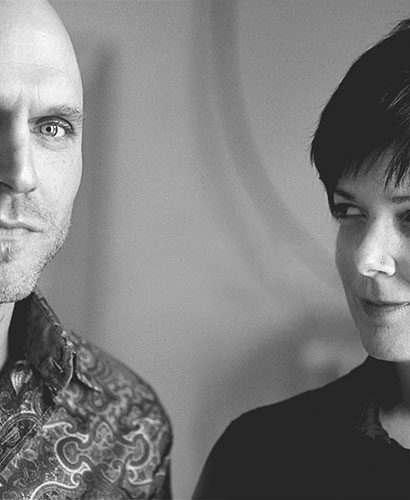 In French, the word “image” is an anagram of “magic” (“magie”), which is fitting indeed: the photographs taken by Robert and Shana ParkeHarrison are sleights of hand. The eye is drawn and captivated to these images, unable to discern what is real and what is fiction, and how what is seen is achieved. Vintage hues and a dreamlike quality characterise these pictures that seem to come to us from a faraway land, where anonymous characters undertake the craziest of tasks: covering a section of damaged land with a carpet made of grass, repairing a broken branch on the single tree left standing in a deforested landscape.

He was born in Missouri in 1968, she in Oklahoma in 1964. He likes featuring in his own photographs, she orchestrates behind the scenes like a film director. As art photographers and environmental activists, the couple has worked together for 20 years. They adopt a Surrealist style to create works which respond to the ever less promising link between humankind, technology and nature. This work is an ambiguous story that provides explanations and certainties surrounding human nature, while exploring the paradox and dilemma created by science and technology’s failure to solve our problems as promised. Turned destructive and violent through the impact of technology and humankind, nature creates the strangest of scenes, in which forces and thrashing elements collide, overwhelming and unstoppable. Robert and Shana ParkeHarrison’s work features in several American and European museum collections, and has been regularly shown since the mid-nineties.

For its 15th anniversary, the Festival La Gacilly is reflecting on the past and contemplating the world as it is, drawing on this year’s theme Question Time for Earth to do so. It seemed only right then that these figureheads of art photography and their unique characteristic style should be included, inspiring viewers to reflect on the complex relationship that binds the individual to the planet. To make these dramatic, poetic frescos, Robert and Shana ParkeHarrison make several large-scale paper negatives of each scene, sometimes even piecing together backgrounds, which are then cut out and assembled like painted seams, before being photocopied.