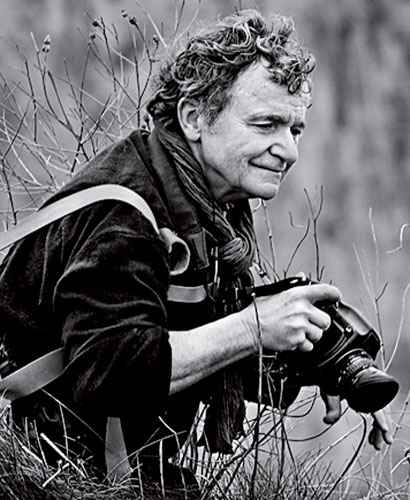 An iconic name in prestigious agency Magnum’s stables, a former staff member at the legendary Gamma agency, a member of the Institut de France and the Marine official painter, Jean Gaumy has been documenting the modern world for over 40 years now. A photojournalist and documentary maker in equal measures, he won the prix Nadar twice, in 2001 and then in 2010 for his After Nature book, some of the photos of which are included in this exhibition.

Considering my background, I’m not really a landscape photographer, according to Jean Gaumy. But it’s human instinct to want to try and instil order in the free-form chaos that nature can sometimes display. As his photography has developed, it has investigated (and continues to investigate) rarely-seen spaces; the presence and influence of humans in inhospitable lands; and ancestral landscapes, as well as recognising the planet’s ancient and new limits. This style could be described as singularly minimalist, as human presence is never shown in any of the photographs on display. Yet despite not being physically present, or lying just beyond Gaumy’s meticulous, high-precision framing, humankind is never far. A path, a felled tree, a building, a mark branded onto the often-untouched rawness of the natural world. These scars of mankind’s presence hint at the existence of an entirely different world. And because these images are so harmoniously composed, so subtle, so powerfully evocative, the photographer needs no captions or descriptions. Their power of suggestion is enough for the viewer to understand the message the photographer seeks to express. When you’re lost somewhere 1,800 metres or 2,000 metres high, alone with your backpack, you can’t help but think “I guess I’ll be taking some postcard shots”, Jean Gaumy smiles. So you soak it all up, and then suddenly, something emerges as spectacular. Only photograph when you cannot resist. Don’t move, don’t strike if there’s no rhyme, reason or necessity.

His images straddle the line between photography and etching: by playing on the contrast between light and shadow, the artist creates dramatic atmosphere that invites the viewer to contemplate this mineral, rocky and aquatic world. Implicitly, he attempts to emphasise the danger that floats at the edges of the world as we know it. Bearing witness to this danger is perhaps more important than bearing witness to war, in his view. Ultimately, the very existence of human life on this planet is at stake.