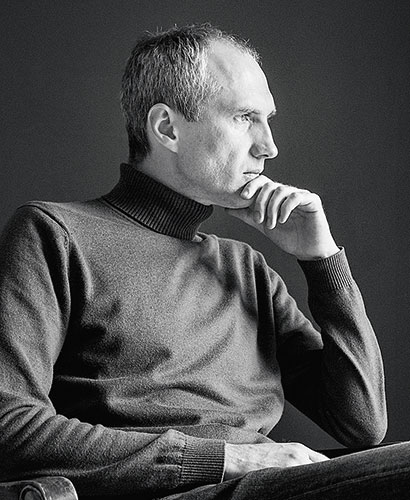 There’s no greater tragedy than talent left unrecognised. Emil Gataullin escaped that fate. Born in Yoshkar-Ola, a village located 750 kilometres to the east of Moscow on the banks of one of the Volga’s tributaries, this 46-year-old photographer was almost unknown in Europe and the States until very recently, and has never exhibited in France.

But that soon changed when his photograph of two boys snapped upside-down on a swing in Ferapontovo (in the Vologda region) won the Peace Photo of the Year 2014 award. Beating off competition from 5,200 other photos from a hundred different countries around the globe, his photograph single-handedly encapsulates Gataullin’s entire body of work: rural Russia, caught in black and white, a poetic, timeless freeze-frame of a world far removed from western clichés of unbridled industrialisation. Free from nostalgia or grandeur, the photographer manages to capture the essence of his native countryside in a style reminiscent of Cartier-Bresson and Koudelka, masters he is only too willing to cite as inspiration.

My photographs aren’t projects, he explains in his book Towards the -Horizon, published after he won his award in 2014. They are merely little glimpses of life. He creates magical, enchanting moments out of the mundane, like this photograph that shows the legs of a woman in a wedding dress and white heels as she picks her way down a street covered in puddles. Her dress billows behind her and her outline is reflected on the wet surface, reminiscent of Willy Ronnis, who snapped one of his most iconic images in 1947: the reflection of the Vendôme Column and the legs of a young, elegant woman.

Born to singer and music teacher parents, Emil Gataullin’s love of the Russian countryside has never faded. When he was small, he spent his holidays with his grandmother and uncle, harvesting mushrooms, looking after the cattle and fishing. It was the best time of my life, as Gataullin himself describes it. And this quote is perhaps the key to understanding his art. His images are an opportunity for him to travel back in time to his childhood village. A gateway through which he reconnects to the world he left behind when he set off for the city suburbs with his wife and daughter. An exhibition to be experienced like a love letter to a country, a romantic adventure in an unknown land where time stands still.