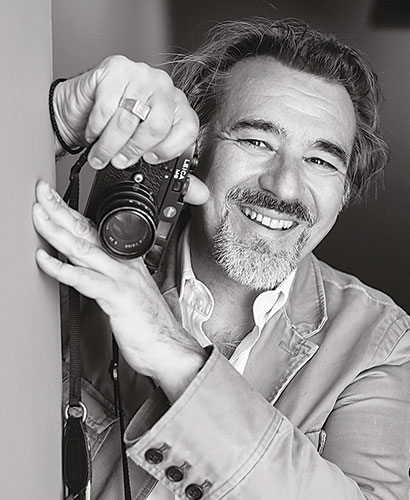 Starting in 2018, the Festival La Gacilly-Baden Photo has forged a link from the west of France to the centre of Europe. La Gacilly is in Brittany, about 100 kilometres from the western edge of the continent. Until 1989, the Iron Curtain, which had divided Europe since 1945, ran about 60 kilometres east of Baden.

With the extension from La Gacilly to the Lower Austrian city of Baden, the festival assumes a significance far beyond a bilateral cooperation and takes on a European dimension. The Festival La Gacilly-Baden Photo is the first pan-European photo festival.

La Gacilly and Baden – two worlds that, at first glance, have little in common. But before Emanuel Scorcelletti’s camera they flow into each other quasi naturally and become one – just like the festival unites the two places. An unexpected liaison, orchestrated by Emanuele Scorcelletti in the manner of a circus director, megaphone in hand, sending music into the arena and integrating the inhabitants of La Gacilly and Baden as actors into his work. And so, in a poetic way, creating something new in a familiar environment.

A visual comparison of the two festival sites.