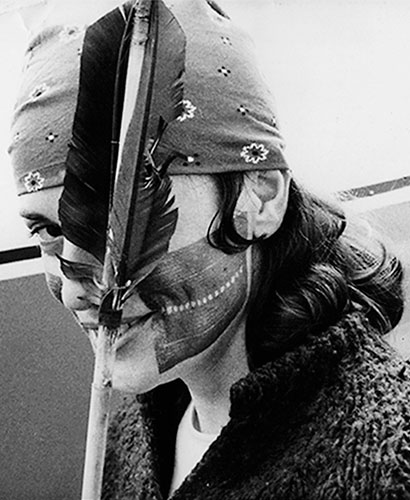 Claudia Andujar’s story is one of meetings- in particular her meeting with a people, the Yanomami people. In 1971, the Brazilian photographer embarked on a reporting mission in the Amazon commissioned by the magazine Realidade, setting off to meet a tribe of 35,000 people scattered from Brazil and Venezuela, living in the bay formed by the tributaries of the Negro and Orinoco rivers. Since it was first introduced to the modern world in 1940, the tribe has lived under the threat of deforestation on a mass scale, and most notably of all by the illegal gold washers who came to seek their fortune on Yanomami land. Claudia Andujar’s report was awarded several grants that allowed her to pursue her research into the subject. She spent almost 30 years recording, documenting and investigating the lifestyles of these native Americans who inhabit a territory the size of Portugal. Her passion for the Yanomami and her commitment to fighting for their survival took her beyond the call of duty as a photojournalist, pushing her into helping set up the Yanomami reserve and an awareness-building campaign aimed at demarcating and protecting native territories.

Born in Neuchâtel in Switzerland in 1931, Claudia Andujar had first-hand experience of a world ravaged and devastated by the horrors of World War II. Her mother was Swiss, but her father was a Hungarian Jew who was deported to the Dachau concentration camp, where he was executed alongside many of his family members. Claudia managed to flee Hungary, where she lived during the war, for Switzerland, and then left for New York in the mid-1940s. It wasn’t until 1955 that she reached Brazilian soil, arriving in Sao Paulo.

Amazonian Lament is an exhibition that combines art photography, anthropology and ethnology. Her exceptionally intimate relationship with the Yanomami allowed her to capture precious, secret moments such as their shamanic rituals. Yet what shines through in Claudia Andujar’s photographs is the elusive, mystical energy that pulses through the Amazon, the dense, opaque atmosphere of the mysterious forest, an air that lingers on the fringes of reality.

Exhibition curated with the support of the Vermelho Gallery in Sao Paulo, which very generously entrusted us with Claudia Andujar’s photographs.